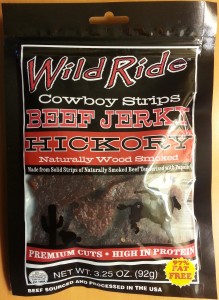 Beef jerky is a staple travel snack for the jerkyologist so sampling the local fare is always an adventure when strolling through airports near and far.  Previously unfamiliar with the Wild Ride jerky brand, and spying a few different flavors on the rack, it was a good opportunity to pick some up and see what they had to offer.  The folks at Wild Ride are focused on offering tender cuts of ‘premium’ beef using a proprietary tenderization process and without any artificial ingredients or preservatives.  It sounds good, but does it taste as good as it sounds?  Let’s see what you get with this one:

Taste (B-):   This jerky is true to its name – if you like hickory smoke then this is your meat.  The natural hickory smoke flavor is absolutely over the top.  Once your mouth acclimates to the smoke you start making out the rest of the jerky flavors.  There’s a good bit of pepper, some garlic, which pleasantly accompany a bit of salt and sweet flavors, too.  It’s a fun flavor, really, but the overwhelming nature of the hickory taste is a bit hard to handle for very long.

Texture (B):  This natural cut jerky is tender and cut against the grain.  Its easy to chew and is a fairly easy eat.  The meat’s thickness feels enjoyably substantial, too.  It’s pretty enjoyable.

Smell (B+):  If you like the savory scent of hickory smoke then this jerky is the one for you.  The hickory is like a parade in your nose… a very smoky parade.  It smells great for what it is and, while that’s all there really is to it, it’s nice enough.

Appearance (B+):  This jerky sports a dark brown color with a matte finish and subtle red highlights here and there.  The naturally cut meat is sized in strips, though some of the pieces are scarcely more than a half-inch in length.  There are the occasional bits of pepper and the like visible on the surface of some of the pieces as well.  All told, it looks pretty good.

Consistency (C):  This is the shortcoming of this otherwise quite enjoyable jerky.  First, the ‘premium cuts’ of beef were generally quite tender and tasty, but more than a few pieces were scarcely edible with some serious gristle woven throughout.  Secondly, while the smokiness of this jerky was dead-on consistent throughout the bag the rest of the seasonings seemed rather hit-or-miss.  Some pieces seemed very focused on the garlic, others sported some coarse ground pepper, and some both.  They were all tasty, but the variability leaves you wondering what the jerky was supposed to taste like all along.  Lastly, for a jerky labeled as ‘Cowboy Strips’ some of the pieces would not likely pass muster in the strip department.  Many of the pieces were, at best, small bite pieces, falling short of a ‘strip’ in any practical sense.  We rarely quibble over variation unless it distracts from the basis of the jerky’s intended appeal and with this bag there was enough variability to take away from enjoying the jerky outright.  Again, while none of it was bad per se, these things are the sort that generally distinguish good jerky from great jerky.

Overall Impression (C+):  This is good jerky.  The hickory smoke flavor really is delicious and the tenderness of the jerky was, for the most part, truly enjoyable.  It would take very little for the folks at Wild Ride to tighten up the quality control a bit and elevate this jerky to the B+ or better it would otherwise earn.  If you happen across a bag of this hickory smoked treat go ahead and indulge.  It’s certainly worth trying and you’ll doubtless enjoy its exceptionally well-done hickory goodness.  Enjoy!