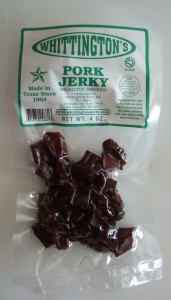 Pork jerky is often pretty tasty given its tender texture and innate deliciousness, but getting pork jerky right is a tricky business that too often yields sorrowful results.  Fortunately, the folks over at Whittington’s know what they’re doing – this jerky is good eatin’!  Here’s what you get with this one:

This is a solidly tasty jerky – a little bit sweet, a little bit smoky, and they’re expertly balanced.  The seasoning is about perfect for pork, allowing you to taste the actual meat itself while adding and enhancing its taste without overwhelming it with the added flavors.  This isn’t something most pork jerky makers do all that well so this is definitely a noteworthy specimen.  The one thing that detracted from my enjoyment was a slight greasy coating left atop my tongue and the inside of my mouth.  It wasn’t bad, per se, but it did lessen the overall appeal.

Fantastic!  This is a firm but tender jerky that gives a great chew while not wearing you out in the process.

This jerky smells alright – not particularly striking – but that’s not unusual for pork.  It gives you a reasonable preview of the jerky’s taste but doesn’t add much to the experience.  Again, for pork it’ll do, but we’ve seen better.

Looks tasty!  The color is rich and inviting and the jerky is slightly glossy.  Overall the appearance is quite appetizing.

Throughout the package’s contents the pieces were very consistently made.  Bite to bite each bit of jerky was more of the same tasty goodness.  Well done, Whittington’s!

This is a tasty jerky and I will definitely purchase it again.  Whittington’s Pork Jerky is a worthy choice for the discerning Jerkyologist.