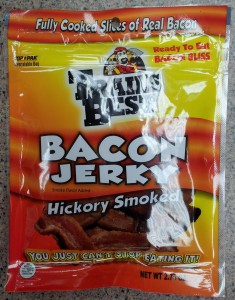 Just like the packaging says this is a bag of fully cooked slices of real bacon.   Sounds simple enough, but is this a treat you’ll want to sink your teeth into?  Let’s see what you get with this one:

Taste (B):  It’s bacon!  Tasty, meaty bacon.  The flavor is pretty straightforward:  smoke, salt, and a touch of sweet.  That’s it, just like regular bacon, exactly like you’d expect it to be.  The hickory smoke flavor is deep and rich and is nicely paired with the salt and sugar.  The salt is a bit much, however, and quickly starts to dominate the taste.  Still, while the salt is a bit over the top this is bacon we’re talking about and it’s still good stuff.  It’s tasty bacon…  ’nuff said.

Texture (B-):  This jerky is tender and chews nicely.  The pieces are mostly thick-cut, and the pieces are generally more lean than not, so it holds together well and feels pretty good.

Smell (B):  The smell of this jerky, while bold like the taste, is almost a bit too bold.  The smoky scent is particularly pronounced and hits your nose hard, not conveying any of the other flavors.  Still, that smell is a delicious one, so even with being a bit confrontational you really don’t mind that at all.  It smells pretty good and is a good complement to the taste.

Appearance (B):  The bacon sports a nicely marbled appearance and an invitingly lean composition.  Unlike more conventional bacon, this bacon jerky isn’t at all greasy and instead has a traditional dried meat look.  All-told, this jerky looks appetizing and convincingly snack-worthy.

Consistency (C+):  It may be one of the pitfalls of bacon, jerky or not, that it is an inherently variable food.  The folks at Trail’s Best did an admirable job producing a generally consistent depth of flavor and moisture, but the pieces range in size from tiny meat scraps to large, fully recognizable strips of bacon.  The pieces themselves are also dramatically variable in thickness.  This seems very explicable, and it doesn’t take anything away from the overall enjoyment of the bacon jerky, but it doesn’t add anything to it either.

Overall Impression (B-):  If you like bacon (and really, you’re reading this site so odds are you do) you’ll enjoy this jerky.  It’s real bacon, made into jerky, and that is a great thing.  The bacon jerky is tasty, fun to eat, and definitely a tasty treat.  Partake and enjoy!