I picked up today’s treat on a recent trip to the UK  at a “Simply Food” store at Heathrow airport – Marks & Spencer’s Peppered Beef Jerky.   This is apparently a product only recently introduced by M&S and is still being rolled out to their various retail properties. 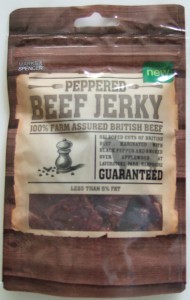 This jerky is made in the UK with “100% Farm Assured British Beef”.  I can attest that British cows are tasty just like their American counterparts.  In this instance, the jerky is cut into small snack-size pieces, typically less than 1” square, and is relatively thin.  These fun-sized bites delivered a thoroughly satisfying snack.  Let’s see what you get with this one:

Taste (B+):  This is a mildly seasoned jerky with some subtle flavor complexity that almost doesn’t register at first.  The jerky is sweet, apple wood smokey, and just slightly tangy.  In fact, for a peppered jerky the actual impact of the pepper itself is comparatively subdued.  The result is a smooth and enjoyable flavor that builds as you go.  The only detractor is that, after the initial flavors begin to fade the lingering flavor is a bit distracting, for lack of a better word, with hints of the soy sauce and such hanging around a little longer than it should.  Still, this is a *very* minor  quibble and the jerky is quite nice, overall.

Texture (B+):  They did well here.  Tender and easy to chew, the jerky feels good in your mouth and is pleasant to eat.  The moisture content was also very well done with a dry but still pliable feel.

Smell (A):  This is a really great smelling jerky.  The apple wood smoke and garlic smells really come through and it is simply fantastic.  The aroma from this jerky is definitely the first joy of eating it.

Appearance (A-):  This jerky looks pretty good sporting a dark, meaty texture, and clean cuts throughout.

Consistency (B):  The flavor throughout the bag was pretty constant, but the thickness of the various pieces was not.  While most of the jerky was cut to be very, very thin, a number of pieces were easily 2-3 times the thickness.  This isn’t a bad thing, per se, but it was enough to be easily noticeable while chewing.  Curiously, the thicker pieces were both some of the tastiest and least flavorful pieces in the bag.  This isn’t uncommon by any stretch, but it does detract from an otherwise exceptional product.

Overall Impression (B+):  Go for it.  You’ll like it!  M&S have commissioned a worthy and enjoyable addition to their product lines with this jerky.  If you find yourself in the UK, pick up a bag and dig in.