Today we ’re taking a bite of some Field Trip Honey Spice No.11 Beef Jerky that we picked up as part of a mixed 6 pack jerky special from Woot! 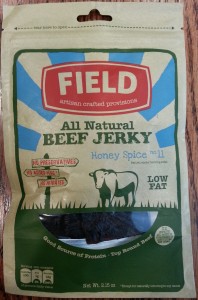 Made from top round beef, the Field Trip folks have placed a lot of emphasis on the stated quality of their jerky.  They chose to make it without artificial preservatives, added MSG, or nitrates and tout their commitment to making something they feel is pretty special.  The previously reviewed Field Test Original and Teriyaki jerkies were pretty seriously good, does this continue the streak?  Let’s see what you get with this one:

Taste (A):  The Field Trip folks didn’t have to use much imagination in naming this jerky.  It is at first a delightfully sweet thing, first with honey and then with brown sugar and pineapple flavors.  They combine in a fantastic way and bring a cohesive sweetness to your palate.  This, however, only lasts for a few moments because the ‘spice’ taste follows fast and doesn’t hold back.  This jerky packs a great spicy kick that’ll really clear you out.  Literally.  A few pieces in and we were fishing around for the Kleenex.  The spicy kick is a one-two punch combination of cayenne and black pepper that is simply fantastic with some Tabasco and white pepper thrown in for good measure.  Even though it kicks like a well-healed mule it’s never overdone.  The sweetness and the spiciness are expertly paired and it’s a truly habit forming combo.  Delicious!

Texture (B+):  This natural-style jerky is cut along the grain and is a bit tougher than the other Field Test jerkyies we’ve tried.  It will take some work to break down this jerky but it doesn’t take too long.  Once you get your teeth into it the meat chews nicely and is genuinely enjoyable.

Smell (B-):  There’s a curious bit of distraction here.  First, the smell carries more of the soy and smoke scents than the taste would suggest while the honey and cayenne scents follow behind them, almost as an after thought.  It smells good enough, but these competing components are not particularly complementary in and of themselves.

Appearance (A):  With a dark brown color sporting red undertones, this bite-sized jerky looks pretty good!  It’s cut very thin and has a combination of straight cut and natural edges.  There’s a bit of a sugary sheen across the pieces, not everywhere but seeming to highlight various spots across the surface of the meat.  It looks as good at it tastes.

Consistency (A-):  Like the previous Field Test jerkies, this jerky seems made with exceptional attention to quality.  The flavor and moisture are spot on, bite-for-bite, delivering the same great taste and texture through and through.  It’s a mark of real skill.

Overall Impression (B+):  This is a thoroughly great jerky that does what it says.  The sweetness and spiciness are brought together so very well that it’s all a real treat to eat.  This is not a jerky for those who don’t appreciate a peppery kick, but if you do this will bring a smile to your face and maybe a bit of perspiration to your brow.  It’s really good stuff and you should definitely take the opportunity to try some out if the opportunity presents itself.  Enjoy!