We’re having a go at a bag of Billy D’s Teriyaki Beef Jerky recommended at a convenience store off the highway just south of San Francisco, California. 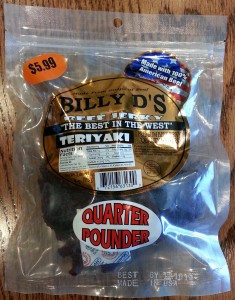 Billy D’s is an American jerky, made from 100% domestic beef and proclaims itself to be “The Best In The West” with a focus on using premium beef for a quality jerky.  The folks at the convenience store said that the Billy D’s line had been a relatively recent addition to their store but had already become quite popular.  It’s been sold for some time “down South” (meaning the LA area?) and they had nothing but glowing things to say about it.  So, with such an enthusiastic pitch from the store clerks, it was doubtless a great candidate for a thorough Jerkyology review.  Does it hold to the hype?  Let’s see what you get with this one:

Taste (C):  This jerky has a generally pleasant flavor leading first with a lightly sweet taste and followed with a slightly savory combination of garlic and onion.  None of these are particularly pronounced, nor is the flavor of the beef itself, so it combines to form a somewhat muted taste.  There is the occasional bite that shows glimmers of tasty goodness, but they’re the exception rather than the norm and you’re generally left with a taste that is pleasant but not particularly remarkable.

Texture (B):  The meat it cut along the grain and is generally lean with a handful of fatty spots here and there.  You have to work a bit to tear off a bite, but once you do it proves to be enjoyably tender and nice to eat.

Smell (B-):  The smell is pretty good, a bit smoky with a slight sweetness to it.  You can clearly make out the teriyaki flavor and the accompanying wine and vinegar scents compliment it well.  Curiously, it smells a bit better than it tastes.

Appearance (C+):  This jerky looks reasonably good, clearly made of quality pieces of beef with a desire to make something tasty.  It has a dark reddish-brown color and a mat finish.  The pieces are irregularly shaped and sport a variety of folds and twists.  At a glance, it looks like a tasty treat.

Consistency (C):  This is a hard one to judge.  On one hand, the jerky has a consistent moisture and thickness that shows the capable hands of jerky making at work.  On the other hand the pieces were frequently stuck together, there were fatty spots throughout, and the intensity of the flavor varied from piece to piece – all significantly detracting from the enjoyment of this jerky.   The challenge here is that the inconsistencies seem clearly within the ability of Billy D’s to manage and leave the impression that there’s a lost opportunity to deliver better.

Overall Impression (C):    This is a decent jerky, but not particularly remarkable.  The flavor is okay, but weaker than the smell, and the jerky itself shows great promise but doesn’t quite deliver to its potential.  As you work through the bag you get the occasional bite that really stands out, but for the most part it’s just passable.  If the convenience store folks tempt you to try a bag of Billy D’s Teriyaki Beef Jerky on your next visit you should definitely assess your alternatives before picking up a bag of your own.  You won’t feel slighted by this jerky, but it won’t reward you either.  Eat well, friends!