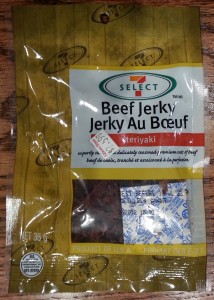 While we purchased this in Canada the packaging says the  jerky was prepared in the USA.  Clearly this was a good opportunity to pump a few dollars into the international jerky market so we picked up a bag to see what 7-Eleven had cooked up for us.  So, let’s see what you get with this one:

Taste (B-):    With a nicely complex sweetness and a good savoriness to boot, this jerky has a pretty solid flavor.  The sweet has a sugary and fruity quality that takes a bit to fully come through but is quite enjoyable when it does.  The savory flavors are also pretty good.  There’s some garlic and onion along with an overall pleasant smokiness.  The resulting mix of flavors is well done and is the clear highlight of this jerky.

Texture (C):  This jerky is a bit rough around the edges, texture-wise.  The jerky is a bit too dry for the size and thickness of the pieces and sometimes has an almost mealy consistency as you eat it.  Even then, it’s hard to really gauge the texture overall because much of the jerky is little more than tiny speck-sized scraps.  Eating enough in one bite to get a decent bit of chewing going involves so many different sized bits that it just doesn’t do much for you.  It’s not bad at all, just not particularly good.

Smell (B-):  The smell is pretty good.  You can clearly make out the teriyaki flavor and the very nicely, but low-key smoke smell is gentle but appealing.  The smell does a good job supporting the overall enjoyment of this jerky.

Appearance (C+):  This is a mixed bag, really.  The meat itself looks to be of decent quality with a dark, slightly reddish coloring.  The individual pieces though range in size from meat dust to tiny sub-bite morsels and this doesn’t really hold up to examination well.  With the jerky being a bit too dry the small pieces look a little desiccated.  Again, it doesn’t look bad by any stretch, but it also doesn’t look particularly good.

Consistency (C+):  The flavor of this jerky is very consistent, which is again key given the relative importance of taste in jerky enjoyment.  The moisture content too, while a bit too low, is even across the contents of the bag.  The impression is of a well controlled, technically well executed jerky.  Where things fall short, unfortunately, is in the size of the pieces themselves.  They’re wildly variable in size – some little more than meaty dust bits, most itty-bitty sub-bite morsels, and a few large enough to take on their own.  While each of those size ranges may be enjoyable in their own right, combined it just makes a bit of a mess.  Really, it suggests that the meat selected, while of good quality, was probably the stuff left over they couldn’t use for something more substantial.  Kudos for being frugal, but it just doesn’t hang particularly well together.  Still, while it doesn’t add much to the experience, it isn’t a major detractor either and ends up more in the realm of amiable ambivalence.

Overall Impression (C+):  As convenience store branded jerky goes, this one is just fine.  It’s a tasty treat that’ll satisfy your meat-tooth cravings even if it won’t distinguish itself as one of your favorites.  If you’re buzzing through a 7-Eleven store and are craving some teriyaki go ahead and pick up a bag and enjoy a quick, simple treat.