Today we’re digging into a bag of 7 Select Original Beef Jerky picked up at a 7-Eleven convenience store in downtown Toronto, Ontario. 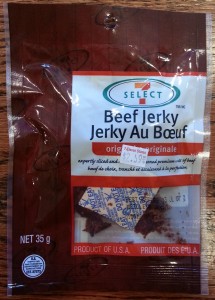 The novelty of seeing beef jerky packaging with alternative text in French was just too much to pass up.  This is classic convenience store fare so the question is, “Buy or bye?”

Let’s see what you get with this one:

Taste (C):  This is a decent, no-frills original beef jerky flavor.  It has a bit of sugar sweetness and the usual savory flavors from garlic, pepper, and the like.  It’s pleasant, but not remarkable.

Texture (C-):  The texture of this jerky is a bit rough.  First, the pieces are slightly too dried leaving them tougher than it seems they should be.  Once you chew for a bit, however, they’re nice enough and the overall experience is enjoyable enough.  Of more importance though is the cut of the jerky itself.  While a few pieces in the bag are large enough to be eaten on their own – though only barely – most of the jerky comes out as tiny speck-sized scraps of meat.  If you pour enough of them into your mouth at once they’re not too bad, but it’s a real detractor to have to do that.

Smell (C):  This is a generally pleasant, but not particularly remarkable smelling jerky.  You can smell a bit of the garlic and such, but nothing specific really comes through.  It doesn’t do much for the jerky one way or the other, and that’s okay.

Appearance (C+):  The meat looks to be of reasonably quality and, at a glance, looks inviting enough in that sense, but the overall appearance of the jerky is really diminished by its desiccated appearance, the result of being just a bit too dry and the tiny scraplette-sized pieces that make the jerky more a serving of meat dust than an appealing meat snack.

Consistency (C+):  The 7-Eleven folks really didn’t impress with this snack.  While noting that the jerky itself is uniformly dry and flavored, the range of piece-sizes just undermines it all.   Again, while some of the pieces are as big as a thumbnail, most of the jerky is little more than dust scraps.  Not bad, really… not bad… but it is something other than ‘good’ per se.  It’s more of a distraction than a feature and just detracts from the treat value of it all.

Overall Impression (C):  This is a perfectly average jerky.  It’s tasty, reasonably well made, and available at your local 7-Eleven store.  If you’re hankerin’ for a bit of jerky this one will do well enough.  You won’t go out of your way for more, but at the end of the bag you won’t regret a thing.  Eat well, friends!