Today we take one for the team.  We’re sampling a ‘mystery’ Original Beef Jerky picked up at an area dollar store.  It’s a people treat style jerky made by Marfood USA, presumably as a private label product, to suit the specifications of the retailer. 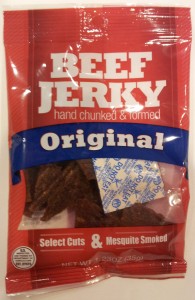 So… alrighty then.  Go ahead and admit it… you’ve seen jerky in a dollar store before but never mustered the courage to actually buy some.  Well now you won’t have to.  Let’s see what you get with this one:

Taste (C-):  This is pretty rough stuff.  First, the flavor has a lot going on.  Too much.  Aside from an abundance of sugary sweetness and a kick of salt, you can make out some mesquite smoke, pepper, garlic, and a curiously sour taste that is probably apple cider vinegar.  It’s just over-the-top and the individual flavors just compete for attention.  It’s not all that bad, but it is certainly not what you would call ‘good’, either.

Texture (C):  Things are a bit rough here, too.  This is described as ‘hand chunked & formed’ and we’ll take their word for it.  It’s reasonably tender and the thickness of the pieces is nice, but the pieces have a curious combination of artificially irregular and straight-cut edges that just don’t come across well.  The surface of the jerky is also a bit… flaky, for lack of a better word… and looks far more desiccated than it actually is.  The texture is unremarkable, but not offensive, and something that you’ll quickly forget.

Smell (D+):  There’s a peculiar mix of sour and sweet, with a bit of a smoky twist, all battling it out in your nose.  This misses the mark and was nearly enough to dissuade taking the first bite.  Ouch.

Appearance (C+):  The jerky is pretty unremarkable in appearance.  The color is a deliberate-looking medium brown and the pieces have a slightly flaky look that would suggest they would be far dryer than they actually are.  The pieces are cut into sizes ranging from nearly-dust sized meat particles to some an inch and a half long.  Some of the edges have the look of an artificially ‘natural’ curves  while others (often on the same piece) have scissor-straight lines.  There’s nothing about it that suggests quality or tasty.  Again, it doesn’t look bad per se, but there’s just nothing appealingly noteworthy.

Consistency (B):  While the other aspects of this jerky may not bare great appeal, Marfood USA clearly has control of their processes.  The jerky is nicely consistent, bite to bite, and suggests quality manufacturing.  It is the bright spot throughout it all.

Overall Impression (C-):  We can only assume that this jerky was expertly made by Marfood USA to their customer’s specifications leading us to wonder what it is that their customer considers to be ‘good’.  Having enjoyed other private label jerky made by Marfood this one is a bit of a let-down.  It is an unremarkable if not actually unpleasant jerky and not something we’d recommend.  More to the point, curiosity has been satisfied and now you know that this is not the place to spend your jerky dollar.  Look elsewhere, dear friends.